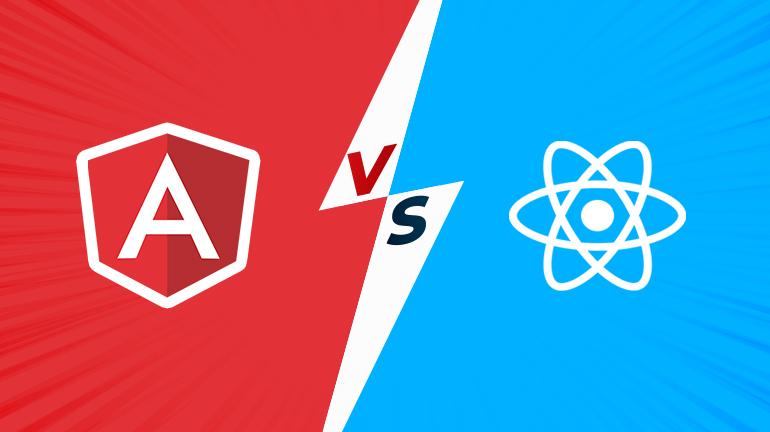 After releasing Angular and React, there is a debate among developers about whether they should choose Angular.JS and React.js. But after a couple of years, the developers got more confused when Vue came into the market.

Deciding on an appropriate framework for yourself can be a challenging task, especially when you have to select between the two supported by tech giants Google and Facebook.
If you are also someone struggling with the same then we are here to your rescue. In this write-up, we will be discussing the two most popular front-end JavaScript frameworks which are currently ruling the community – Angular.JS and React.js.
So, before jumping to any conclusion for your project, you should have in-depth knowledge of the variations these frameworks have and what are their pros and cons. We have tried to cover each and every feature. So, without further ado let's get started.

Outline of the frameworks:

AngularJS is an open-sourced JavaScript framework supported by Google and used for the development of dynamic, single-page web apps. It is fully extensible and works efficiently with other libraries. Apart from being one of the topmost frameworks in the community, AngularJS is easy to learn and strong enough to develop critical single-page web and mobile applications and supports the MVC programming structure.

Released in 2016 it has an HTML and typescript template language. Angular helps to modify every feature to suit your development workflow and project needs.
Talking React is a JavaScript library developed by the social media giant Facebook in 2013 which is used for UI development. It simplifies the development of interactive User Interfaces and makes the code easier to be implemented and launched.

Let’s glance through the pros of AngularJS:

Code Generation
Angular quickly turns your templates into codes that are highly optimized for JavaScript VMs giving its users an advantage of hand-written codes with the productivity of a framework. This helps the developers in creating error-free code and assures the quality of the product.
Angular uses TypeScript language which builds on JavaScript. It compiles JavaScript but also eases the process of finding and eliminating the common issues while typing the code.

Efficiency
Angular applications load rapidly with the new Component Router, which performs automatic code-splitting so that the users only load the code required to render the view they have requested.

Complexity
Angular can be considered because of its complexity ranging from lower to medium category. The independent classes of dependency injection deliver higher performance to the applications being developed on Angular.

Flicking through the pros of ReactJS:

Unlike other JavaScript frameworks, React uses the Virtual DOM – the abstract form of Real DOM, which helps in developing strong template solutions. This makes it convenient for the React developers to update the changes performed by the users in the application without affecting or making amends in the other parts of the UI. This gives a dynamic and eye-catching user interface along with single routing and data binding.

In the case of React, it allows the developers to work directly with the components and use downward data binding. This is done to ensure that the parent branch structure does not get affected by the amends made in the child branches. This perspective makes the code secure and helps to develop a finer and more stable code.

In React, the developing organizations can reuse the code components at various levels which makes React easy to use. Each component is secluded from the other and any supported changes in any segment do not affect the other, which makes it easier to manage the updates making it more methodical in terms of its implementation.
The above-mentioned features make the React app development efficient, streamlined, and easy for developers.

The juxtaposition of the two frameworks:

1) Angular vs React performance
Angular uses a real DOM structure where the tree data structure is updated even if a single section or branch of the tree gets updated or altered. Whereas, React uses a Virtual DOM structure which enables the developers to update any branch without making amendments to the original tree structure. Hence, a virtual DOM takes the lead here and is considered faster than the real DOM.

4) Best Features
The Flexibility to choose provided by the React framework in terms of tools, libraries, and the app structure is much better than Angular which also helps you make the app highly customizable. Angular has average performance and flexibility when it comes to complex and dynamic web apps.

5) Architecture
Both the JavaScript frameworks are having a component-based architecture which means that they are reusable, interchangeable, and connected components. The only difference is in their language. React uses JavaScript while Angular uses Typescript for web-based applications development which proves to be error-free and compact.

6) Dependency Injection
React does not fully support dependency injection as it does not fully comply with the idea of functional programming and data immutability. Instead, it has a global state for all components. The greatest advantage of Angular rests in the fact that, unlike React, it supports dependency injection. Therefore, Angular allows different life cycles for different stores.

React demands a set of tools to perform various types of testing and debugging. While in Angular the same procedure for a complete project is possible with a single tool without any complexity being added further.

Are you looking for Custom mobile app development?

React and Angular both are good options when it comes to single-page web applications. They have their own pros and cons but you should know which framework or library would be best suited for you and your project.

The popularity of these front-end applications is only going to increase in the future so you can rely on them for at least a few years. You might not be convinced by the above write-up and following some of the best react native app development companies for guidance would not be such a bad idea. It will allow you to learn about this framework and its usability a little better. This will allow you to decide on the framework as per your requirements. All the best!